Various contracts for use when leasing out personal property or equipment for personal or business use.

Equipment Leases & Rental forms specifically designed for use in various situations when leasing out personal property or equipment. 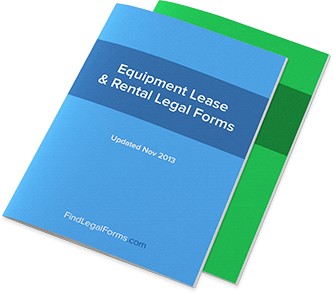 Canadian Lease Combo Package Get 10 forms for just $44.95. Save 57%! Popular Save Money with this combo package containing all of our most popular Canadian Lease Forms

What are Leases and Rentals?

Leases and Rentals are two sides of the same coin; in a lease, you’ll generally commit to a rental for a predetermined period of time. For example, in a Residential Lease Agreement, you’ll commonly be asked to make a commitment of 12 months of paying rent or more. In a Rental Agreement, the period through which you’re renting the property (such as a car) is more flexible.

What’s the difference between Leases and Rentals?

It’s important to remember that the type of property being rented out is not the sole difference. You can both rent and lease a car, for example. Generally, rentals will be taken for a shorter period of time than a lease; a lease typically represents a longer commitment of time and finances.

Because of those facts, the types of property handled by the different documents have certain tendencies. Leases tend to be used in the case of Residential or Commercial property – for example, renting out an office or an apartment for a year or more. Rental forms will be used for property that is not rented out for such a long period. For example, renting a moped to drive through a tourist attraction will not require that a lease be signed.

Additionally, each form will come with its own distinct provisions and responsibilities. When you lease, you generally assume some (but not all) risk connected with damage on the property. In short-term rentals, you’ll likely assume a greater amount of risk.

Why do I have to sign a lease? Why can’t I just rent something?

When you sign a lease, it typically represents a commitment that is like ownership, but is not in fact ownership. When you lease an apartment, for example, you assume responsibilities that you would not otherwise assume if you were simply “renting” one temporarily. You’ll be responsible for the maintenance of the property, for example. You’ll also have more freedom to use the apartment as you like, with certain limitations.

Is every rental, in fact, just a form of lease?

No, because the two types of agreements each have their own distinctions. Those distinctions are detailed in the answers above.

What kind of property can I lease?

Just about any type of property can be leased. Large property – such as commercial or residential property – can be leased. Smaller space – such as garage space – can also be leased. But you can also lease furniture, automobiles, charter boats, aircraft, etc. If there is someone out there with property that they are willing to lease to you, then you can likely find the lease you were looking for.

What kind of property can I rent?

Again, the options are virtually limitless. However, when you’re looking for long-term commitments on expensive pieces of property, you’ll likely be asked by the owner to sign a lease and not simply a rental form.

What kind of provisions should I watch out for when signing a lease?

Knowing what’s in a lease is all about knowing the property inside and out – and knowing your responsibilities while you use that property. For example, consider the fact that you’ll likely have to fill out an apartment checklist when moving into a new apartment. This checklist helps the owners know what condition the apartment started in so that they can compare it to the end of your lease and see how well you did maintaining the property. Understanding your responsibility to maintain property, as well as other limitations (for example, residential leases might not allow your pet) will be key in understanding whether or not you have a reasonable lease on your hands.

I’m renting some equipment while on vacation. Do I have to review the whole contract?

We recommend always reading everything you sign. But most businesses have standard rental forms that they’ll give you when you’re renting a piece of equipment – whether it’s an automobile or a jet-ski. It’s particularly important to review the whole contract when you’re dealing with a small business; the forms that large corporations use are far more likely to be considered “standard.”

When is a Lease or Rental form enforceable?

Both contracts will be enforceable once they’re validly signed. It’s important to pay attention to the dates listed on each form, however, to understand their enforceability better. For example, if you rented a car for one day and it was damaged the next day, it’s unlikely that your contract will be enforceable simply because the terms of that contract had already ended. Even so, each contract will continue to be enforceable in provisions that aren’t subject to the scheduling terms.

What are the requirements for a Lease or Rental form to be valid?

Both you and the company you’re renting/leasing from will have to sign the document in order for it to be valid. Generally, no witnesses will be required for these types of forms. You may have to initial certain provisions in order to prove that you approved of them. Other issues like your consent and willingness to sign along with consideration for both parties will be required to ensure that a valid contract has been signed.

When is a Lease or Rental form effective?

Rental forms are often effective from the moment they’re signed, since you will typically sign them at the outset of the rental period. A lease is also effective right away, but may be subject to date terms that outline a more specific period of time.

Because this period might not occur right after the contract signing, the effectiveness of a lease may hinge a bit on the terms it contains.

Unlike other sites, every document on FindLegalForms.com is prepared by a lawyer, so you can be sure that you are getting a form that is accurate and valid in Canada.

Our forms are guaranteed
to be valid in Canada

Our team works tirelessly to keep our products current. As the laws change in Canada, so do our forms.

Download your form in
a format you can use

After you place your order, your forms will be available for immediate download. You can save the file for later use or print it immediately. We make all formats available to you at no extra charge.

In over 10 years of creating and selling legal forms, our focus has never changed: providing our customers high quality legal products, low prices and an experience that takes some confusion out of the law.

Try our forms with no risk

If you are unhappy with your form purchase for any reason at all, contact us within 60 days and we will refund 100% of your money back.